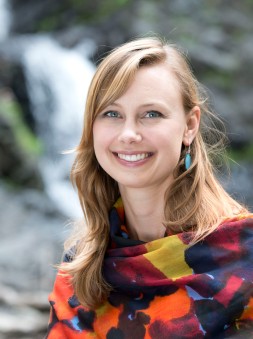 Jaime Jacobsen is an Emmy Award-winning filmmaker who is passionate about telling stories that cultivate conversation on contemporary social, environmental, and humanitarian issues.  Jacobsen’s most recent film, Finding Traction, premiered at the Banff Mountain Film Festival and went on to screen in 26 countries around the world. It won an Emmy, four international awards, was featured on Netflix, screened at the TELUS World of Science IMAX Theater in Canada, and is currently available on Amazon Prime. Jacobsen also won an Emmy Award for her work as a Field Producer on Indian Relay, which aired on PBS’ documentary series, Independent Lens, screened twice at the Smithsonian, and was scheduled for over 900 broadcasts across the U.S.

Most recently, Jacobsen was awarded a $500,000 grant to co-produce and direct the feature documentary, The Last Artifact, about the work of scientists around the world to redefine the world’s last artifact: the kilogram.  The film is scheduled for international release via PBS International later this year.  She is also working on The Lentil 360, an educational VR project about regenerative agriculture on the High Plains, and Diaries of Displacement, a collaborative media project with Venezuelan migrants and asylum seekers in the Rocky Mountain West.

In addition to making films, Jaime has taught as a Faculty Fellow in the Honors College at Montana State University in Bozeman, Montana and as an Assistant Professor of Media Studies at Notre Dame University–Louaize in Beirut, Lebanon. She received a fellowship to São Paolo, Brazil with Rotary International, led Documentary and Photography expeditions for National Geographic Student Expeditions in Australia and Tanzania, and has produced films for Engineers Without Borders in Kenya and Pathfinder International in Mozambique. In 2019, she joined Colorado State University as an Assistant Professor in the Department of Journalism and Media Communication.